In front of my apartment, birds occasionally come and sit on the terrace window and chirp and spend time on that terrace. And there you go! that’s the birth of another episode of the ponder series. I have always felt that birds always instill a feeling of freedom and a sense of liberation, maybe because of the sight of the way they fly or could be a perception of a kind of deliverance they naturally effuse. But have we thought about the engineering behind their navigation and direction sense?. It’s truly a breathtaking sequence to ponder upon and I would like you to walk you through some interesting tidbits which probably you might have not previously thought about.

(A photograph that I took from Buyukuda Island in Istanbul. It’s also called Princess Islands.)

Right from college, I’ve been fascinated with biomimetics. My bachelor’s degree academic seminar that I presented at university was on this topic. Now, almost a decade from college, albeit my professional life is on an entirely different field, I’m still very inquisitive on this topic. I regularly try to read and keep up with the latest trends in this field.  I’m intending to write more about the case studies I had done myself in this domain. By definition,

Biomimetics or biomimicry is the imitation of the models, systems, and elements of nature for the purpose of solving complex human problems.

Biomimetic engineering methodologies basically study patterns or entities in nature and try to derive engineering applications in order to solve real-world problems and assist people. So, I came to read about bird navigation along these lines and I was actually blown away by how they worked. Most of the migratory bird species, who normally fly these long-distance flights have some sort of “body clocks” in them. They wonderfully assembly at a particular place and usually flock together. There are many amazing aspects such as how they save fat in their bodies during these long journeys. For instance, a hummingbird flying a 3000 km distance between Alaska and Hawaii would have to beat its wings 2.5 million times and as we know, the bird weighs only a few grams. The bird faces a danger of rising temperatures but if we look at it, their metabolic activities are designed in such a way that the body temperatures of birds rises to around 62 degree Celsius. The metabolic activity of hummingbirds is around 100 times that of elephants.

Birds also have special gliding and flight techniques to cater to these long journeys. They sometimes fly in a “V” shaped formation, which aeronautical engineers estimate to achieve a saving of 23% in the flock. (Aeronautical engineer Dietrich Hummel’s study)

Among other factors, another major one is the perception of direction which is mandatory for such long distance flights.  Modern research has shown that the earth’s magnetic field is also used by the birds. The direction is determined by sensing the change in the earth’s magnetic field. Findings show that even a 2% difference can be assessed by birds. National Geographic has a good piece on this topic if you’d like to delve in more. 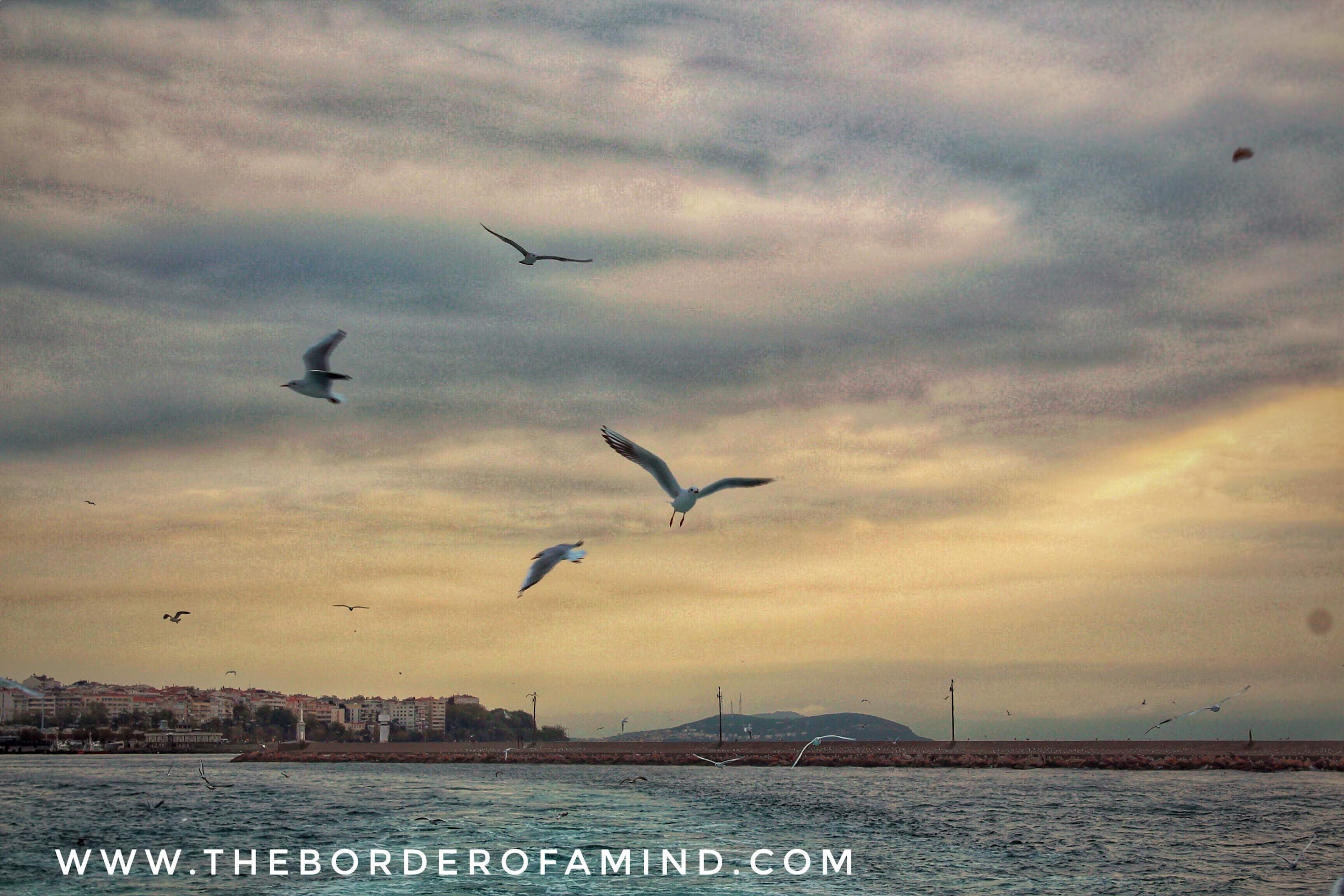 Another photograph that I took during a cruise at Princess Islands, Istanbul.

To summarize it, a lot of factors help birds with their navigation not limited to, the sun, sense of timing, location of the stars, ultraviolet rays, polarised light, sounds of very low frequency, sounds such as of waves and thunder coming from very far away, the magnetic field of the earth, gravity, meteorological assessment, favourable winds, characteristics of the ground below etc.

I’m not getting into the technicalities too much, but as we can see even something we seemingly deem as trivial such as the flight of birds is in fact on a divine plan and arrangement if we really think deep about it.

Perceptions in the brain